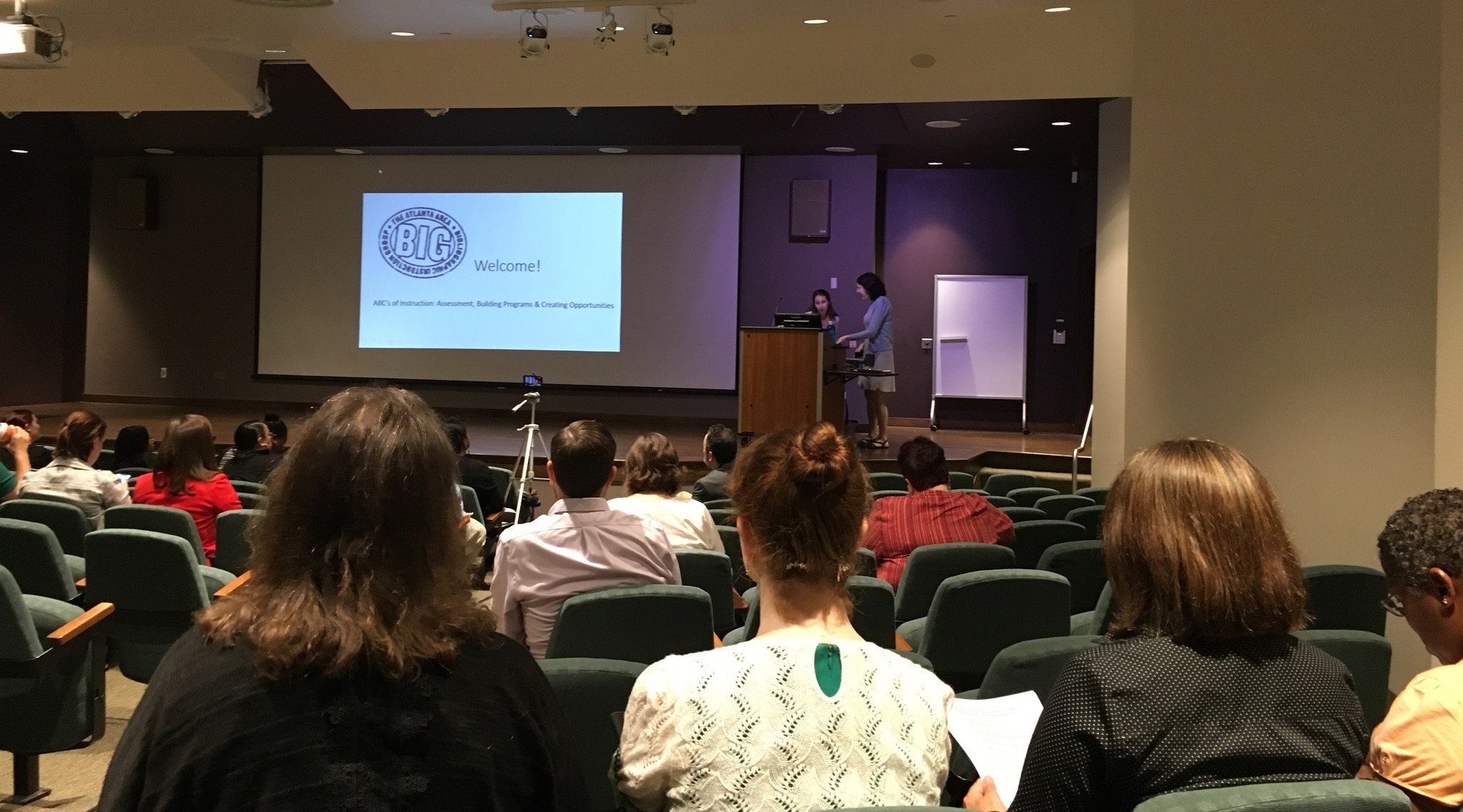 The Atlanta Area Bibliographic Instruction Group (AABIG) is getting ready for their annual conference on June 19 – this time, fully online. We spoke with AABIG President Amy Stalker, Associate Department Head at the Georgia State University Dunwoody Campus, about this year’s theme, the challenges and opportunities of planning an online conference, the group’s merger with GLA’s Reference and Instructional Services Interest Group, and the future of AABIG.

Question: For those not in the know, how would you describe AABIG?

Amy: AABIG serves as a professional development/networking opportunity for all instruction librarians in Georgia. While it started firmly centered on the Atlanta metro area, the past few years have seen tremendous growth of the organization spread across the entire state, and now we’re even seeing a spread into surrounding states.

Another unique aspect of AABIG is that it welcomes librarians at every level, from student to experienced pro. It has managed to maintain a unique way of connecting us through the shared common interest of instruction. For students, it allows critical early exposure to what’s happening in the field along with low-stress opportunities for networking or presenting. For veterans, it provides an excuse to reconnect with a broad base of colleagues, a way to stay up on changes in the field, and a chance to bounce new research interests via those same low-stress but high-value presenting opportunities.

Question: Can you tell us a little bit about this year’s theme, Diversity: Impact & Innovation?

Amy: The topic of diversity falls at the center of a lot of the discussions in librarianship right now- perhaps the most obvious being a focus on EDI. Looking at the presentations and articles being written right now, it’s clear that it’s really of interest and top of mind to many of us. We are being asked to think and reflect on it not only in the day-to-day work that we do, but also in our work within our institutions. It is an important and broad concept that immediately brings to mind people, but at its core, diversity can mean variety of all kinds and it implies an element of inclusion that brings to mind an openness to thinking and approach beyond the status quo.

The theme was meant to get us thinking creatively, and that’s where the impact and innovation comes in.  We are having some great conversations about what’s happening, but now we are inviting you to share what you’re doing and to reflect on how that work is impacting your work and its outcomes. In spite of the current COVID situation, we had a terrific number of proposals submitted.

Unfortunately, the digital format prevented us from being able to share all of the incredible work being done. It should come as no surprise that many of the proposals reflected work with diverse populations that addressed racial, socio-economic and gender issues. I hope that the proposals that didn’t make the final cut find another way to be shared because it was pretty amazing to see how people chose to interpret the theme and apply to what they are doing here in Georgia.

Question: How was the process of transitioning to a fully-online conference?

Amy: To be honest, we bounded into 2020 really excited about this year’s conference with every expectation that it would be face-to-face at Kennesaw State. They were quick to jump in as a sponsor when asked, and they were an enthusiastic and engaged partner – including reaching out to see if there were vendors who wanted to jump in this year as well.  I think it’s safe to say that while there have been digital conferences and webinars built around themes and shared professional interests, many of us still prefer that in-person experience.

To further complicate matters, we are traditionally a free event that has historically come from a organization whose sole purpose is to produce this popular (and amazing!) annual event. When we realized for certain that it was a no-go in March, I think the entire AABIG board also knew and felt that if there was any way to make it happen in some form, that we really needed to buckle down and work around the virus.

Kennesaw continues to play a role in this year’s event by providing the digital infrastructure that we will need to pull this off. As far as new opportunities, I’d say a silver lining is that the digital format makes it much easier to record content for archival purposes and asynchronous viewing, and it also makes it so much easier for MORE people to attend.

There are some obvious limiters, too. We had to really cut down the amount of content, but we are also able to provide some pre-recorded sessions to make up for some of that. I’m very excited about this year’s event. It’s definitely not going to be the same, but I do think of AABIG as being one of those milestone events in my own professional calendar.

Q: Can you talk a little about AABIG’s merger with the Reference and Instructional Services Interest Group, and what future directions you’d like to see the conference move in?

The biggest and best announcement that AABIG has this year is that after this year’s conference we will be transitioning to the even more fabulous GLITR, which stands for Georgia Library Instruction, Teaching and Reference (Conference). Not only does that roll off the tongue a little better, but it also reflects an evolution of AABIG as an organization. After a tremendous amount of work on the part of many – but especially of past AABIG president, Karen Doster-Greenleaf, and Catherine Manci of RISIG – AABIG will be rolling under the RISIG group in GLA. With that change comes several things.

First, it’s not exaggeration to say that AABIG is a beloved institution that spreads beyond the metro Atlanta area. However, in the past few years, it has been difficult to maintain a stable continuity of leadership. Everyone loves AABIG, and it’s a can’t-miss event, but it did tend to fall off people’s radar when it came time to recruit leadership roles. I think some of this can be attributed to the time of year calls for nominations were held. They did fall in that weird time when many of us are taking a breath and trying to figure out how we will get to December. AABIG also wasn’t tied to any specific organization. Initially, I think that was definitely for the best as it got started with that grassroots feel, but it also meant that it was another way it dropped off our radar. Branding and visibility suffered. With its new affiliation to RISIG/GLA, AABIG will get the visibility and stability it deserves.

Second, instruction has changed since the start of AABIG. Very few still (regularly) refer to what we do as bibliographic instruction. When the discussions started about finding a way to link AABIG to GLA, something that was definitely was top of mind was that the focus on instruction as bibliographic instruction was limiting. An entire category of peers who also instruct were, at some level, being left out of the conversation. That’s the reference piece. Though many straddle both roles, traditionally AABIG didn’t see much on instruction in relation to what happens at the reference desk or during a reference transaction even though it’s there! Expanding the membership to directly state and include reference is a growth opportunity for membership and shared professional interests.

In terms of the future of GLITR, I think the potential is amazing. Coupling the brand and reputation of AABIG with the RISIG group opens some interesting opportunities. I think that could start with more than single event a year. It probably wouldn’t be a second traditional conference initially.  I am thinking it could be regional meet-ups and sponsored webinars. The opportunity to pull from a larger membership for RISIG-sponsored sessions at GLC. The option to consider moving the annual conference around the state to allow even deeper participation. A newsletter or blog that provides writing opportunities? Networking or mentoring programs? Why not?  I believe that the interest and enthusiasm is there for GLITR to explode…which is a pretty exciting visual considering the new name!