Carnegie Branch Library in Savannah in the Spotlight! 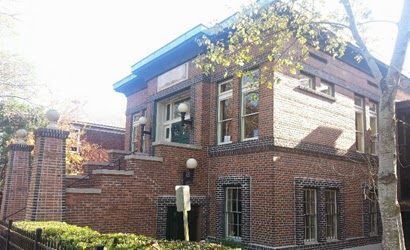 Carnegie Library has rich roots embedded in the African American community of Savannah. Today it remains a focal point for educational programs and a community meeting space. The historical marker acknowledges the significance African American Savannahians and others placed on education and scholarly research one hundred years ago.

Since 1903 the African American community of Savannah spiritedly debated the need for a public library of their own. In 1906 black community leaders founded the Colored Library Association of Savannah. The twelve original founders were: A.L. Tucker, Julian Smith, J.W. Armstrong, E.E. Desverney, J.T. Burton, Henry Pearson, Dr. F. S. Belcher, H.H. McBeth, G.W. Jacobs, L.S. Reed, R.W. Gadson, and C.A.R. McDowell. In 1913 a petition was sent forth to the Carnegie Corporation for funding and construction began in 1914. The building was dedicated later that year on August 14th.

The building is the only example of Prairie Style architecture within the city. The regal staircase leading to the main entrance on the second floor is framed by two enormous piers with sandstone orbs on small pedestals. Narrow vertical windows, with rectangular transoms are also characteristic of the Prairie Style. The entrance is flanked by two sconces with large glass globes and is ornamented, above the doorway, with an open book with the inscription “Carnegie Library”.

Carnegie has a warm familiar feel. While small and quaint, it also offers an full array of services, programs, and technology resources many library users of the 21th century have come to expect. It also houses an extensive African American reference collection and remains a beloved structure within a community. Among famous visitors are James Alan McPherson, Pulitzer Prize-winning short story writer and essayist and Clarence Thomas, Associate Justice of the Supreme Court of the United States.

The library is seeing renewed interest from students, tourists, and visitors as well as the wider community of residents. New generations of users often encounter many local senior residents who freely share their stories of growing up in the Carnegie Library. They also remind younger generations how important the library was to their education and encourage younger users to appreciate the importance of libraries.

New and old residents continue to stream through the doors for a tour or to acknowledge that they never knew the history of the Carnegie Library. They are greeted by friendly staff behind the same desk countless others were greeted over hundred years ago. While time has marched on the Carnegie Library remains a stalwart in its role to serve the community as it has done and we suspect will do for another one hundred years.