The Fannie Mae Davis Special Collections Room in the library on Selman Drive is named in honor of Douglasville’s Head Librarian from 1961 until 1981, when the library was in the Bowden Street location. Fannie Mae Davis wrote a book on the history of our county entitled “Douglas County, Georgia: From Indian Trail to Interstate 20,” and her portrait hangs in the Special Collections room to honor her dedication and service both to the library and to the city of Douglasville. 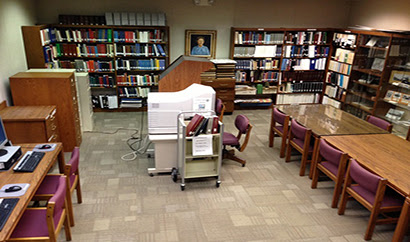 The display cases in the room house many glimpses of local history, from photos of local families and early government officials, to the New Manchester ruins in the Sweetwater State Park, as well as civil war items and bricks from the ruins. There are souvenirs from Centennial events in Douglasville, early government books from the courthouse, and our rare book collection. There is an embroidery that was donated to Douglas County Public Library by Margaret Rowe McMichen which shows the history of Douglas County and has always been a key piece of our collection. The collection also houses records on microfilm including Georgia censuses, and issues of the Douglas Sentinel newspaper dating back to the early 20th century. There is a map collection which includes Sanborn Fire Insurance maps of Douglasville and other early Campbell County maps (what is now Douglas was once a part of the former Campbell County), along with the listing of Confederate soldiers from that county.

The library has seen an increase both in use of our Special Collections and in donations from patrons and the Douglas County Genealogy Society.

The library now offers two basic genealogy classes a year, as well as instruction on the basic use of Ancestry.com and Heritage Quest. If you’d like to learn more, please contact the Douglas County Public Library at 770-920-7125, or visit during operating hours.