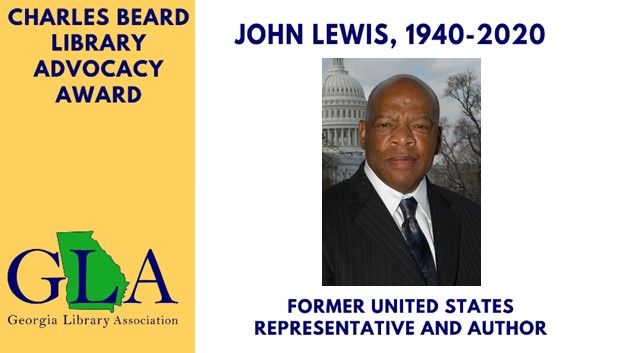 The winner of this year’s Charles Beard Library Advocacy Award is the late Honorable John Lewis, a former member of Congress, award-winning author, and icon of the Civil Rights Movement.

This is the first time the Georgia Library Association has presented this award posthumously. Lewis died last year of pancreatic cancer at the age of 80 after serving more than 30 years as a U.S. Representative from Georgia.

As a young boy in Alabama, Lewis never forgot being denied a library card because of segregation laws. He grew up to become a staunch supporter of public libraries and the author of several books, including his award-winning memoir, March, a graphic novel trilogy. He was one of the original Freedom Riders and a founder of the Student Nonviolent Coordinating Committee, just to name a few of his many accomplishments and contributions.

Congratulations to all of the award winners honored today at GLC 2021. They are: