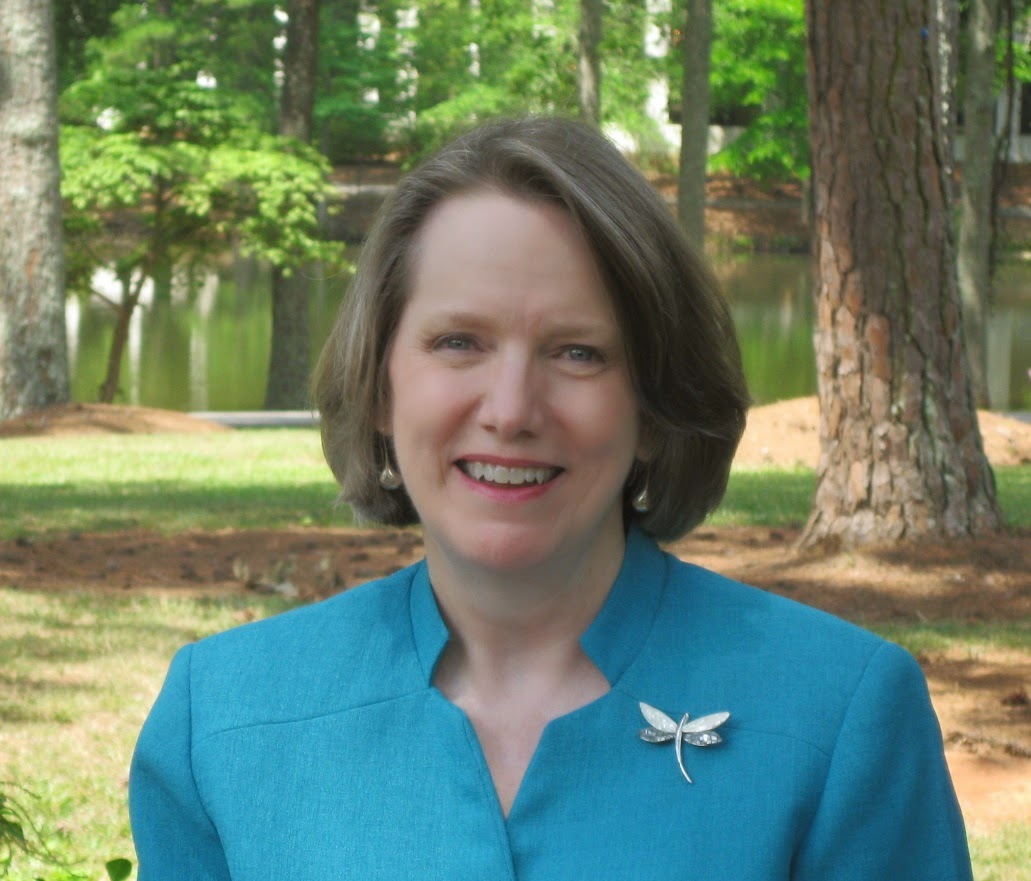 Cathy Jeffrey serves as the Associate Dean of Libraries and Head of Collection and Resource Management at the Clayton State University Library.  She received an A.A. from Reinhardt College, a B.A. in English from the University of Georgia, and an M.S.L.S. from Florida State University.  After graduation from Florida State, Cathy joined the faculty of Georgia State University’s Pullen Library as a cataloger and was promoted to Head of the Monograph Unit.  She took time off to raise her family returning to Georgia State several years later as a temporary, part time cataloger.   She accepted a permanent part time cataloging position at Clayton State University in 1987, which has evolved into her current position.
A GLA member since 1989, Cathy most recently served as Treasurer of GLA 2009-2012.  She has also served as Chair of the Academic Library Division, Chair of the Awards Committee, Chair of the Handbook Committee, and Chair of the Technical Services Interest Group.  In addition to GLA, Cathy has been involved in the University System of Georgia Consortium.  She currently serves as Chair of the Next Generation Catalog Collaborative Technical Services Team.  She is a past chair of the GIL Cataloging Functional Group.
Cathy is excited at the prospect of serving as First Vice President/President Elect of GLA.  She brings with her knowledge of the history of the Association and a commitment to its future.  Cathy is particularly interested in finding ways for new members to become more involved in GLA.

Fred Smith has served in Georgia libraries since March 1977.  His career began at Columbus State University where he worked first as a Reference Librarian with interlibrary loan responsibilities and was later appointed as the Periodicals and Circulation Librarian.  He moved to Statesboro in 1986 to become a Reference/Interlibrary Loan Librarian at Georgia Southern University and in 1992 he was promoted to his current position as Head of Access Services.  In addition to managing Access Services, he is responsible for overseeing Interlibrary Loan.  Currently, he supervises seven people directly and 11 more indirectly, not counting student assistants.
Fred has over 30 professional publications, is a long-term columnist for the Journal of Access Service, a regular presenter at COMO, and the winner of the 2005 GLA Academic Division Outstanding Paper Award.  He has delivered two invited presentations.
Promoted two years ago from Associate Professor to Professor, Fred demonstrates extensive service and leadership skills.  In addition to serving as a Faculty Senator several times, Fred has chaired the Faculty Development Committee, the Faculty Welfare Committee, and an ad hoc committee appointed by the President to update the University Statutes.  Through the Faculty Development Committee he allocated over $100,000 in travel and development money and chose the recipient of the annual Award of Excellence in Teaching for the University.  On the Faculty Welfare Committee he worked closely with the Provost to design a five-year review of deans.
An active member of GLA, Fred has held numerous leadership roles and only missed one COMO/Georgia Library Association Conference since attending his first one in 1978.  These include: Interlibrary Cooperation Roundtable, Circulation and Access Interest Group, GLA Secretary, and the Secretary, Vice Chair, and Chair of the Academic Division.  He has also held several offices in the Southeastern Library Association, was a member of the GUGM Planning Committee for six years – the longest of any member, and chaired the GUGM Planning Committee in 2008.
Grateful for the opportunities GLA has provided to him, Fred Smith welcomes the opportunity to serve as Vice President, President Elect. 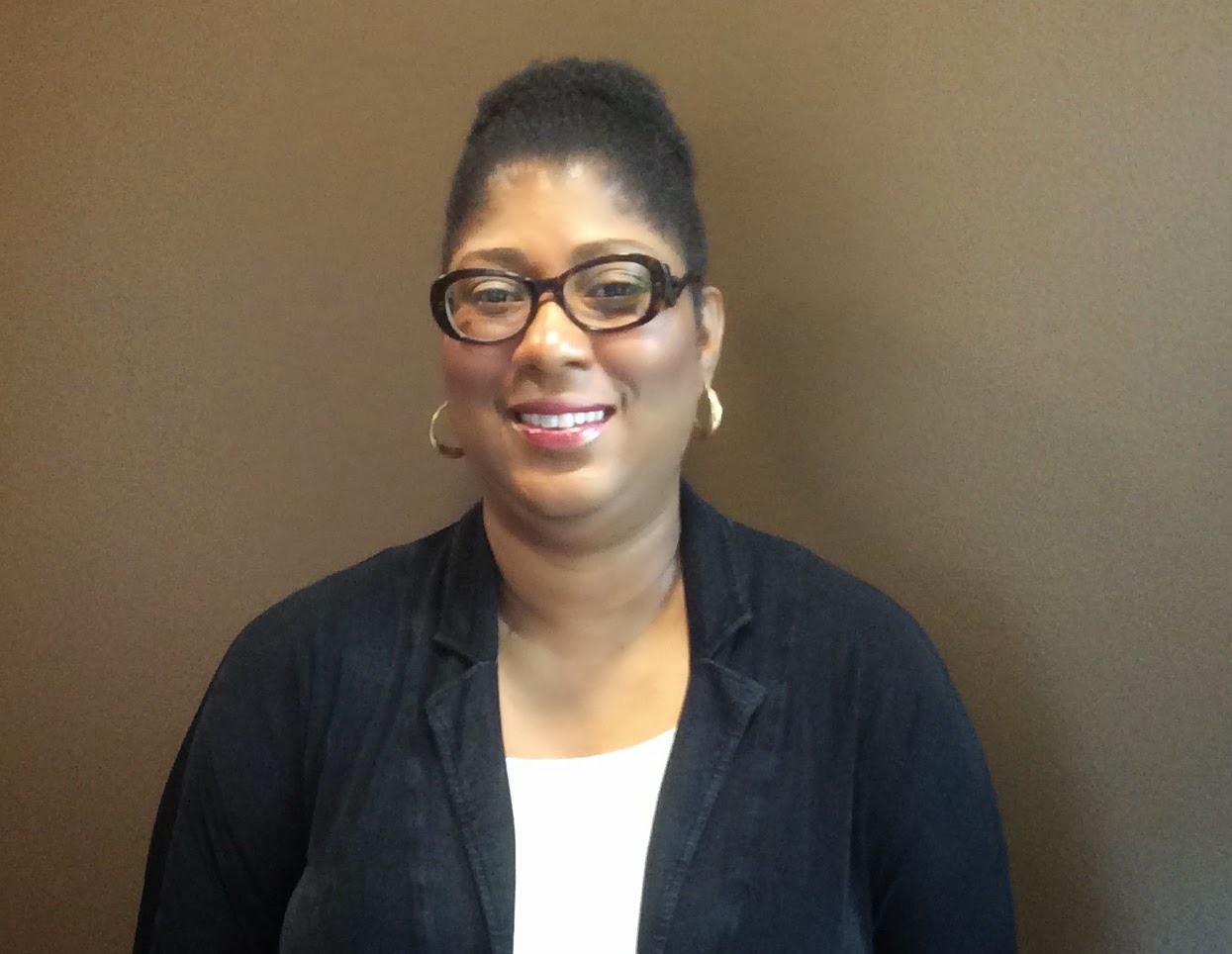 Tammy Henry serves as the Library Director at the Doraville Library in Doraville, Georgia. The Doraville Library is an affiliate branch of the DeKalb County Public Library System. She started working with the City of Doraville in 2011. Previously, she worked for 15 years in Columbus, Georgia at the Chattahoochee Valley Libraries. Tammy served in many roles in the Chattahoochee Valley Library System, including Children’s Librarian, Reference Librarian, Technical Services Librarian, and Interim Branch Manager. She has also worked in academic libraries and special libraries. She is currently serving as GLA Chairperson of the Public Library Division.
Tammy received her M.L.I.S degree from Clark Atlanta University in Atlanta, Georgia.  She is married to Dr. K.T. Henry, II and has two adult children, Robert and Amber.

Karen Manning is a Metadata Specialist in Scholarly Communication and Digital Curation at Georgia Tech where she assists with the development, implementation, managing and maintenance of digital collections. Karen has over 30 years of progressive experience working in libraries in a variety of public service, technical and administration roles. Actively involved in GLA, Karen has served on the Awards, GLA Store, and Scholarship committees. Currently, Karen is the Chair of the Paraprofessional Division where she has served in this capacity several times. Her goals have been to help the advancement of support staff and paraprofessionals, by promoting continuing education opportunities, getting them involved in professional organizations and introducing them to resources that will help them develop skills and gain library related knowledge. Karen spends her extra time volunteering in community public school libraries/media centers and holding book donation drives to help create and stock bookshelves for shelters and community organizations.
Karen looks forward to advocating for and encouraging participation and involvement in the profession, furthering the mission of libraries and librarianship. 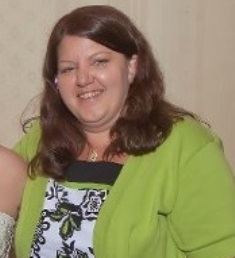 Kathy Pillatzki is Assistant Director and Head of Collection Development and Reference Services for Henry County Public Library System. She holds a Bachelor of Arts from Johnson University and a Master’s degree in Library and Information Studies from Clark Atlanta University. She began her career with HCLS in 1995 and spent 10 years working with children and young adults before accepting an administrative position in 2005.
During her tenure as a Children’s Librarian she served as an elected member of the Georgia Children’s Services Quadrant Council and was a frequent presenter at the Children’s Services Annual Conference and the Teen Services Conference. She served as liaison to other community agencies and non-profits, developing three ongoing outreach programs to take library services to underserved populations. She also served on the Georgia Book Award committee and the Georgia Peach Award committee and as a judge for the Georgia Student Media Festival.
Within GLA, she has served on the Scholarship Committee, and as chair of the Intellectual Freedom Interest Group and the Collection Development Interest Group. She has also been a frequent presenter at COMO. She writes a weekly newspaper column about all things library-related, and has contributed book reviews to Georgia Library Quarterly.
Kathy is also cross-trained as a cataloger, and in 2012 was part of the team that cataloged the contents of the library in the Georgia Governor’s Mansion.
In her spare time, she enjoys the outdoors and managing an active family which includes her husband Dan and four nearly-grown daughters, two of their own and two long-term exchange students from Germany and South Korea.
She appreciates the many professional development opportunities that GLA membership has provided throughout her career, and looks forward to serving GLA with an emphasis on fostering public awareness of the vital roles libraries of all kinds play in our communities.

A Georgia native, Ariel received her BA in Art History and International Affairs from Oglethorpe University in 2006, and her MLIS from Valdosta State University in 2012.
Previously a paraprofessional for the Cobb County Public Library System, Ariel is now a librarian at Kennesaw State University. Ariel’s primary job duties reside in the Technical Services department as the Automation and Batch Cataloger, but she ventures out into the public services sphere as well. Ariel serves as a liaison to the Art & Design, International Affairs and Foreign Languages departments at KSU, performing collection development in those areas and working reference and instruction as needed.
Ariel has been active in GLA for the past four years. Recently, Ariel co-chaired the 2013 Atlanta Emerging Librarians Planning Committee, and is the 2014 GLA Public Relations Committee chair. She looks forward to furthering her involvement with GLA in the future. Ariel enjoys attending meetings, accurately documenting information and making detailed lists, as well as horseback riding, eating sushi, and spending time with her two rescue dogs. 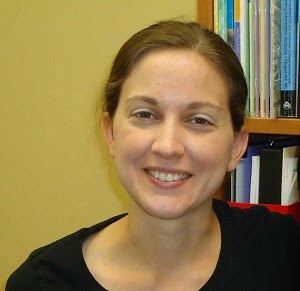 Amy Eklund holds a Bachelor of Music degree from Southern Methodist University and a Master of Library Science degree from University of North Texas.  She currently serves as Director of Library Technical Services at Georgia Perimeter College.  At GPC, she enjoys her involvement with virtual reference and social networking for the GPC libraries in addition to other college and library committees.

Amy has been an active member of GLA since returning to her native Georgia in 2006.  As the Academic Library Division’s ACRL Chapters Council Representative from 2011-2012, Amy attended ALA Midwinter and Annual conferences on behalf of the division and reported on ACRL happenings. She currently serves as the Nominating Chair for the Academic Library Division. From 2008-2010, she served as Secretary of the Technical Services Interest Group, and for the past 5 years she has coordinated the runners for the Georgia Student Media Festival. She is a regular presenter at Georgia COMO, and consistently volunteers to assist with the scholarship raffle and registration.

Amy would be honored to represent GLA as the ALA Councilor. 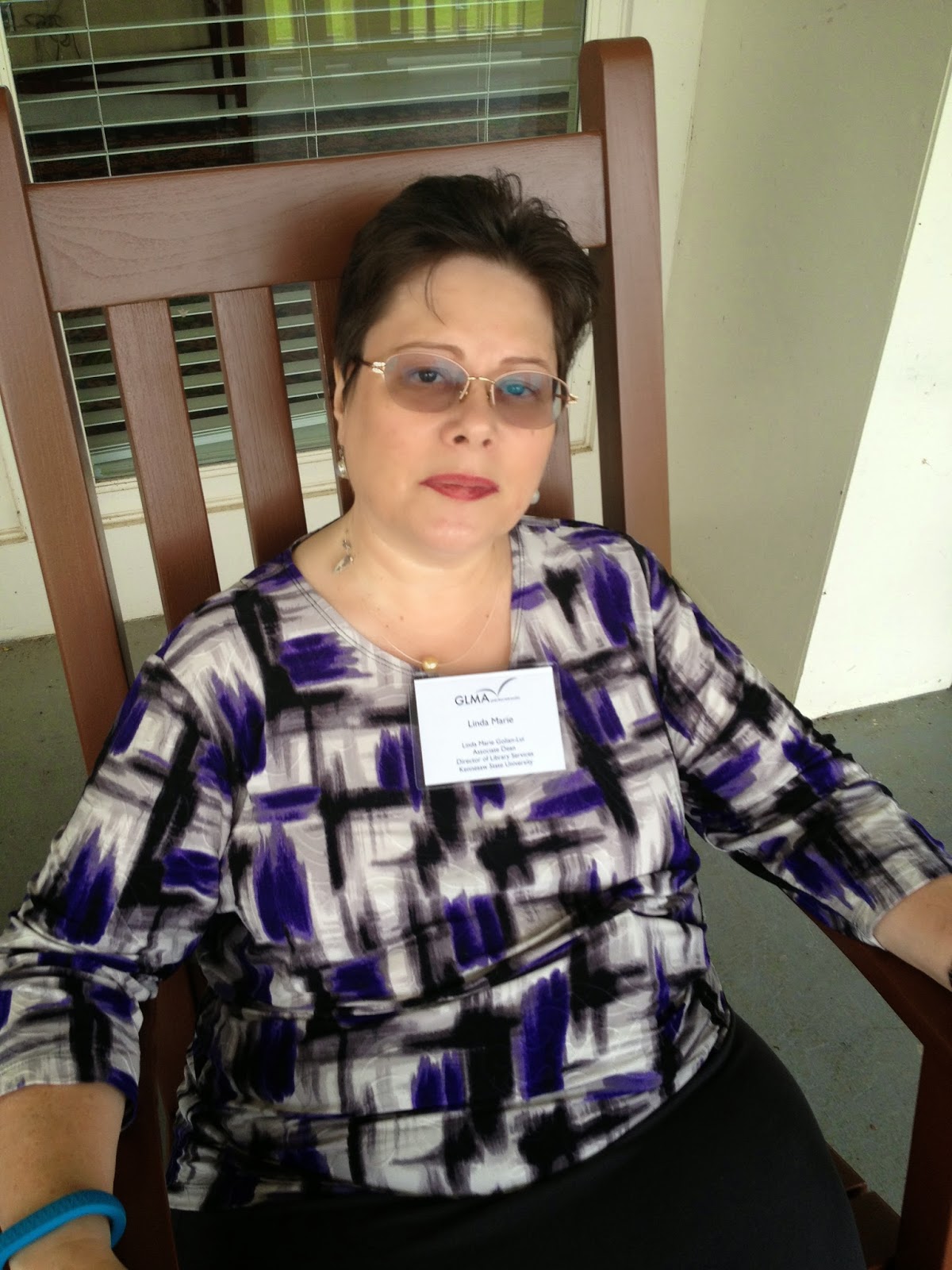 Linda Marie Golian-Lui is the Associate Dean and Department Chair for Library Services for the Kennesaw State University Library System.  She is also the Director of the Sturgis Library and holds the rank of Professor of Library Science.
Linda has approximately 33 years of working full time in academic libraries.  She began her career as a paraprofessional at the University of Miami, Otto G. Richter Library in the Serials Department where she did both public and technical services duties.  Linda received her Ed.S. and her Ed.D. from Florida Atlantic University where she focused upon learning and thinking styles among academic librarians.  She is currently a graduate student at Kennesaw State University in their Certificate Program in Leadership and Ethics.
Linda was the ALA State Council Representative for Hawaii for 8 years from 2002-2009 where she enjoyed working on ALA Council issues and was responsible for fostering a better understanding of native Hawaiian and distant membership issues.

Since arriving at University of North Georgia (UNG) in 2006, when it was Gainesville State College, Sean has worked in a number of different capacities over the years but his current responsibilities include Voyager System Administration, GLRI and local catalog maintenance, library liaison to Computer Science, Math, and Physics, and a variety of circulation, reference, and teaching duties.  Sean has taught both of UNG’s credit courses – Research Strategies 1501 and 1502 – and is continually presenting library workshops to students, faculty, and staff around campus.  Throughout his career Sean has served on a number of committees on campus including Faculty Senate, Promotion and Tenure Committee (Chair), and most recently the Distance Education Advisory Council, which has allowed him to become a Quality Matters reviewer for the University’s online courses.  Sean’s interests include distance education, instructional design and delivery, teaching information literacy, and educational video production.
Sean serves as the Treasurer for the Friends of the Athens-Clarke County Library.
Sean received his MLIS from Rutgers University in 2005 and his MEd in Instructional Design and Delivery from University of Georgia in 2010.

Rita Spisak has worked as a library assistant and a librarian at the Horace W. Sturgis Library at Kennesaw State University for twenty-nine years. She has worked in the Serials & Circulation departments. Presently, she is the Acting Assistant Director of Access Services and Outreach Librarian. Her duties include reference, and instruction. Rita chairs the KSU Sturgis Friends of the Library. She was a recipient of a GLA Paraprofessional Grant in 2006. She has been a member of the GLA Scholarship, Awards, and Public Relations committees and the Circulation and Access Services Interest Group. The past two years she has been the Secretary for the GLA Reference Services Interest Group.  Currently, she is a board member of Friends of Georgia Libraries (FOGL) and administers their Facebook page.
She has been a member of SELA since 2011.
September 2, 2014