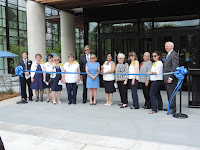 Located on the west side of the Gordon State College campus sits Hightower Library, which recently re-opened after undergoing a complete renovation.  The building was not the only thing to undergo changes.  Upon re-opening its doors, the library received a new name which reflects its mission to support individual and collaborative group study. It is now officially known as the Dorothy W. Hightower Collaborative Learning Center & Library.  Dr. Sonya Gaither, Director of Hightower CLC and Library since 2014, was instrumental in spearheading the library’s renovation, as it was under her leadership that the Board of Regents proceeded with the $4.2 million renovation.  Building renovations began in the summer of 2015, and the grand re-opening was held on April 21, 2016.  Included among the 888 guests that day were speakers Merryll Penson, former Executive Director of Library Services, Vice Chancellor Shelley Nickel, and Regent C. Thomas Hopkins, as well as the Hightower family.

Hightower Library was originally constructed in 1976, but its recent renovation is helping to bring Gordon State College into the 21st century.  The updated facility boasts a number of modern conveniences, from writable surfaces to a self-checkout machine for books.  Though no additional square footage has been added, many guests have remarked how much bigger the library seems.  This is due to a more open floor plan, as well as the addition of windows which flood the building with natural light and allow visitors a prime view of the campus. 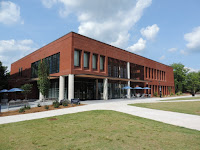 Upon entering the library you will find a spacious study lounge, equipped with plush seating, tables, and vending machines.  Beyond this area lies the circulation desk and a computer station which features sixteen computers, two printers, two ScannX machines, and a self-check book machine.  An additional twenty computers are located behind the reference collection, giving students access to a total of thirty-six computers. The library also provides two microfilm readers, twelve laptops which may be checked out by students, and thirty laptops which are used for classroom instruction.  The general collection is located on the second floor, along with eight individual study rooms, nine group study rooms, and two classrooms (all of which may be reserved online). Each study room is furnished with a desk, chairs, writable walls, dry-erase markers, and erasers.  The group study rooms also feature large screens equipped for laptop hookup.

Hightower Library is currently staffed by five librarians and three library assistants, typically hires three to four student workers each semester, and utilize interns and volunteers.  The library’s holdings include approximately 102,757 books, 27,417 electronic books, 9,637 microfilms and 4,785 audio-visual materials. Additionally, the library subscribes to 48 print magazines and provides access to over 8,000 full text online journals in GALILEO. With its extensive collections, both print and electronic, and its newly updated facilities, Hightower CLC & Library remains a vital component of the Gordon State College community.