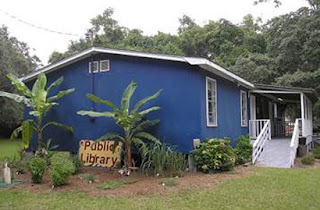 Hog Hammock Public Library is on Sapelo Island, a Georgia barrier island accessible only by a state-run passenger ferry or private boat. The library is in the Historic Hog Hammock Community, one of the last intact, island-based Gullah-Geechee communities in America. Our island has a rich history as well as beautiful beaches, marshes and forests.

Hog Hammock Public Library was founded in 2002 by the Sapelo Island Cultural and Revitalization Society Inc. (SICARS). The library originally was located in the SICARS office. In 2006, the library became a separate nonprofit organization, and was rededicated as a member of Three Rivers Regional Library System, based in Jesup, Ga. Sapelo’s library is now located in the island’s former two-room schoolhouse, and has more than 2,500 cataloged materials. The PINES library card gives Sapelo patrons access to more than 10 million materials statewide.