Map and Government Information Library of UGA Libraries in the Spotlight! 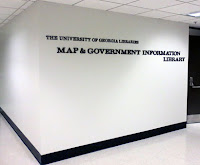 The Map and Government Information Library (MAGIL) opened its doors in the summer of 2012, making it the newest of the UGA Libraries. Created by the merger of the former Map Library and the University of Georgia Libraries’ extensive government documents collections, the Map and Government Information Library is located in the sub-basement of the Main Library on UGA’s North Campus. Its mission is to provide bibliographic, physical and intellectual access to cartographic and government information in all formats.  The UGA Libraries serves as Georgia’s regional Federal Depository Library as well as the official depository for documents published by the State of Georgia. Its government documents collections also include select international and United Nations documents. 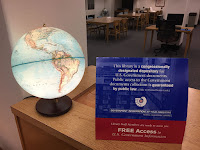 MAGIL is home to one of the largest academic map collections in the country, with over 400,000 sheet maps from all over the world – with a particular emphasis on the State of Georgia – as well as the largest collection of aerial photographs of Georgia outside the National Archives. The collections also include a wide variety of domestic and international atlases, Georgia city directories, and digital geospatial data.  In addition to maps and government documents, MAGIL has a GIS Lab with an array of software that allows users to create maps and perform spatial analysis, and large format scanners and printers that allow users to digitize and reproduce maps and other materials from our collections.

Maps and government documents have been an integral part of the UGA Libraries for well over a hundred years.  Although UGA was officially designated a Federal Depository Library in 1907, there is evidence to suggest that depository status may have been granted as early as the 1850s.  The former Map Library first came into existence in the late 1960s, when map collections from the Libraries and the UGA Geography Department were combined to create the Map Room in the Science Library.  When the Map Room’s space was converted into a server room in 2005, the map collection was moved to an off-campus warehouse and renamed the Map Library. The plan to combine the map and government documents collections to create a new library dates back to 2008. Once the Richard B. Russell Library for Political Research and Studies moved to its new home in the newly-built Special Collections Libraries Building in 2011, the space they formerly occupied in the Main Library was remodeled as the future home of the Map and Government Information Library.

MAGIL provides resources and services to UGA students, staff, and faculty as well as state, regional, national, and international researchers.  For further information about the Map and Government Information Library and its collections and services, please visit our website: www.libs.uga.edu/magil.