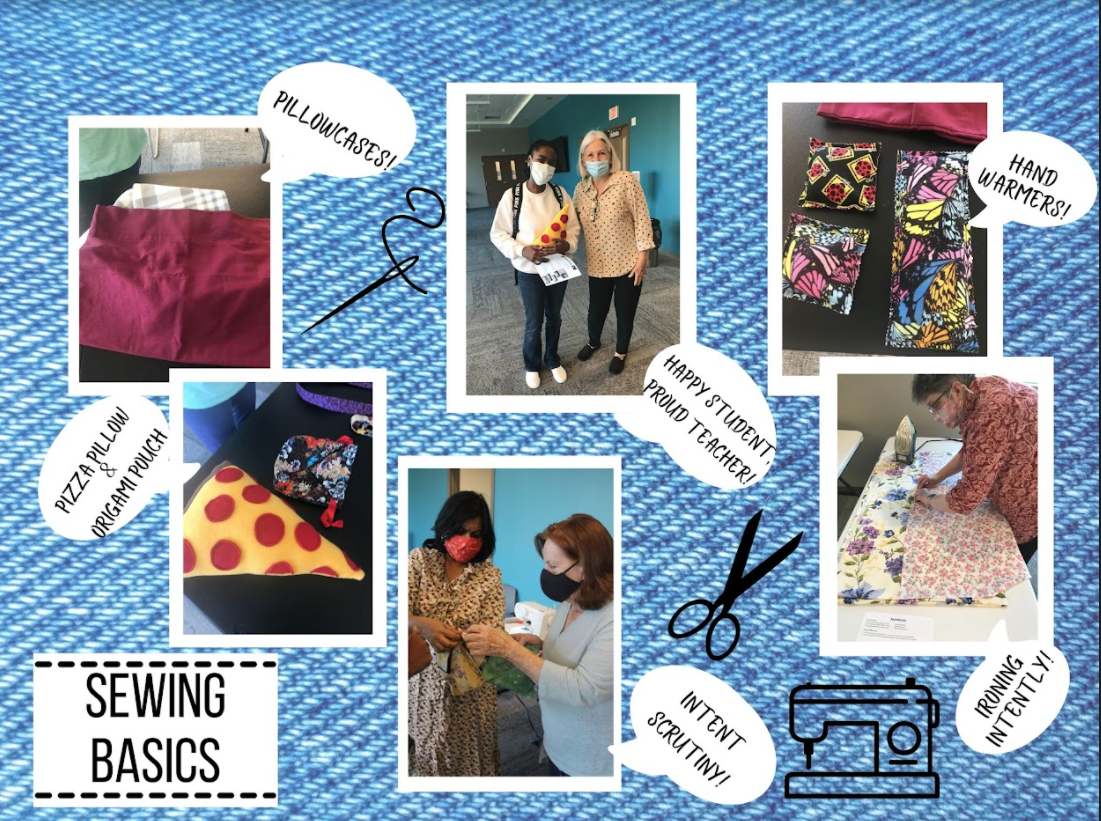 This past September, the North Cobb Regional Library’s first Makerspace machine sewing series, titled Sewing Basics, was off to a splendid start. It was a four-part program that taught patrons the basics of threading a sewing machine, loading a bobbin, changing out a needle, and making four simple items.

Session 1 taught patrons to get comfortable with their machines, sew straight seams, and learn about seam allowances, back stitching, and turning corners. Patrons put their new-found skills to use and made flannel hand warmers which were filled with basmati rice. Everyone completed their projects and gained confidence.

Session 2 was about learning the difference between knits, weaves, and fabric weight. Patrons recognized the difference between cotton vs. fleece and picked out what pattern of fabric they wanted to make pillowcases. Ironing the right way, using a rotary cutter, and measuring fabrics using the cutting mat were taught and practiced. Everyone completed their pillowcase project and went home excited with plans on how their new pillowcases would be used.

Session 3 introduced interfacing to the patrons. Using the skills learned from prior classes, patrons measured and cut fabric to make “D” ring fabric belts. This was a more challenging project with ¼ inch seam allowances and turning the belt inside out. We went past our time, but everyone finished their belts. Senior Library Assistant Vidhya had to get in on the belt-making excitement and made one for herself too!

Session 4 gave our patrons an option of making an origami drawstring bag, a snap close spectacle case, or a pizza pillow. Our teen patron picked the pizza pillow and everyone else picked the drawstring pouch. We watched proudly as our students made amazing origami bags and used all the skills they learned over the past three weeks.

The series was a great success with daily demands from patrons asking when the next session would be offered. Our group was truly multigenerational – spanning four generations – and the instructors were both library patrons and North Cobb staff. Almost all the fabric we used were donations. It was a very enjoyable series for both the patrons and instructors. Sewing Basics will start again in January as a monthly series.

​To learn more about the North Cobb Regional Library, go to https://www.cobbcounty.org/library/locations/north-cobb-regional-library.