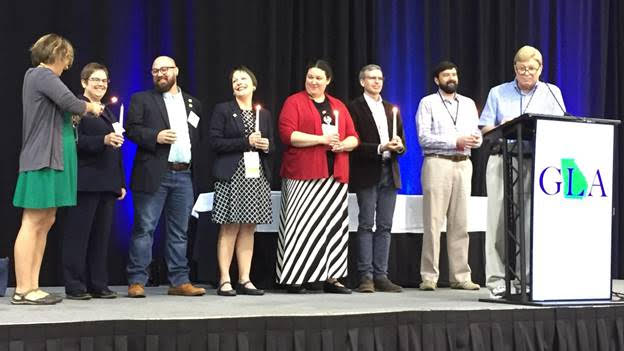 On January 1st, 2020, the new officers for the Georgia Library Association began their service. The Officer Induction occurred in October during the Georgia Libraries Conference in Macon, Georgia.   Dr. Gordon Baker presided over the induction ceremony that included lighted candles.

The following GLA members are serving as officers in 2020:

In a statement about her presidency, Laura Burtle remarked, “My election as GLA President was a huge surprise and honor! The last year learning about the role from 2019 president Jennifer Lautzenheiser has been illuminating, and I am excited about the year ahead. The chance to work with librarians, library staff, students, and library supporters from all over the state and all kinds of libraries is energizing and one of my favorite things about GLA!”