Riverside Military Academy in the Spotlight! 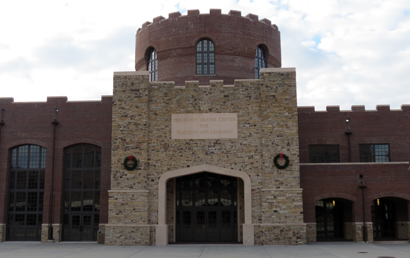 The Riverside vision began with two Gainesville businessmen and professors, Haywood Jefferson Pearce and Azor Warner Van Hoose, Jr.  Pearce was president of the local women’s school, Brenau College, and based upon his success there, these men gathered support from more than thirty local investors to charter an all-male, military school. As a result, construction for Riverside Military Academy began in 1907, and the doors opened for classes in the fall of 1908.

By 1913 the twenty-five acre campus included two brick buildings and a small wooden cottage. In 1913, Pearce and Van Hoose hired Sandy Beaver to be Riverside’s head of school. Beaver would go on to acquire ownership of the school in 1915 and preside over its growth until his death in 1969.

Riverside operated a winter campus in Florida for more than fifty years. In 1931, Sandy Beaver purchased the Hollywood Hills Hotel in south Florida. With the exception of brief time during World War II when the Navy used the Florida campus as a training facility, the school’s cadets and staff would spend January through March at the Florida campus and the remainder of the school year would take place in Gainesville.

Every year when the entire school “moved south”, the Academy would also pack and transport a portion of the Library’s collection for student and faculty use at the Hollywood campus. One could truly say that the Riverside Library was indeed a “Traveling Library”!

Facing tremendous commercial development in the area surrounding its Florida campus, the academy sold that property in 1984 to dedicate resources to the renovation of the Gainesville campus.

Riverside began its Gainesville renovations in 1997 and completed the project in 2004. The renovations, totaling about $95 million, began with a new barracks building, which replaced nine older dormitory buildings, included a new academic building, a new gymnasium, extensive renovations to its athletic fields, and a new library and performing arts center. The Riverside Library is now housed in the Sandy Beaver Center for Teaching and Learning which was named in honor of General Sandy Beaver. The collection currently contains over 20,000 volumes including an extensive reference section, special collections, and thirty-five print periodicals. Over twenty-four computers are available for classroom and individual resources including Encyclopedia Britannica, and GALILEO databases.

Riverside Library programs and activities include:

The RMA Corps of Cadets consists of over 400 cadets from more than twenty countries. For more information about Riverside Library, please visit http://www.riversidemilitary.com.

Story Walk® at the Thomas County Public Library in the Spotlight
July 31, 2020