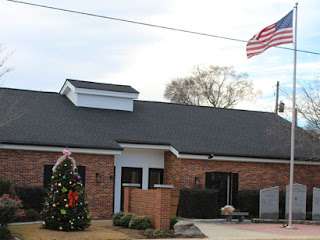 The Ruth Holder Public Library is the newest branch of the West Georgia Regional Library system. The new branch is located in the old city hall building in Temple, and it was opened to the public on December 19, 2015. With only a month under its belt, this little public library is already bringing the town together as a center for the community. The library covers approximately 5,000 square feet and will primarily serve the 6,500 residents of the Temple area. Getting the library into the community has really been a labor of love. Different people have been trying for over ten years to get a library in Temple, and when city hall decided to move to a new space last year, the idea to open a local library came to the forefront again.

“The outpouring of support from the community has been really gratifying,” said WGRL Director Roni Tewksbury. “There have been so many people who have just stopped by the library just to look around and to say how thankful they are to have a library in their community.” And people really are stopping in. For such a new library in a small community, traffic in and out has been heavy.
Putting the library together has really been a collaborative effort. Donations have poured in from around the region, and both the Civic Woman’s Club of Carrollton and the Community Foundation of West Georgia have made sizable grants to the library to get it up and running. Carroll County SPLOST funds were used for the renovations and the furnishings and equipment. The library system made sure that the building would be of good quality for library service for at least the next twenty years: new roof, new HVAC, gutters and downspouts, new lighting (all LED), and upgraded cabling for technology.

“We wanted it to be a Christmas gift to the city,” said Tewksbury. Before this library opened, residents had to drive to Bremen, Carrollton, or Villa Rica for the nearest public library services. The library has hit the ground running when it comes to serving the community. Even though the staff is entirely new, they have hosted their first story time, and they are actively planning their participation in the upcoming West Georgia Reads community read program in March and sponsoring a children’s digital photography workshop series in May. They are also in the process of founding a Friends group.