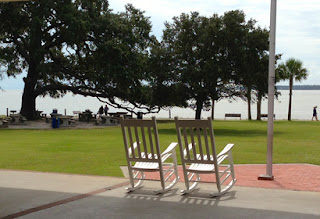 St. Simons Island is one of the four barrier islands that make up the Golden Isles on the Georgia Coast.  It is known for beautiful beaches, golf, and tons of fun filled entertainment.  One of the precious spots to visit is the St. Simons Island Public Library.  It occupies a little over 4,000 square feet in the historic ‘Old Casino’ building in the Pier Village on St. Simons Island.  The library boasts views of St. Simons Sound, Jekyll Island, Little Cumberland (on clear days) and sits in the shadow of the 104-foot St. Simons Island Lighthouse—a truly unique location.

The library was founded in 1937 by Mrs. Abbie Fuller Graham with 50 books temporarily housed in the home of Captain and Mrs. J.C. Clark on Arnold Road, St. Simons Island.  Later that year, Glynn County Commissioners agreed to house the library in the ‘Casino’ building on the island under the sponsorship of the Cassina Garden Club.  The first book accessioned in the library “Drums along the Mohawk” by Walter Edmonds (1936) was purchased from the Baker & Taylor Company for $1.88.  The book remains in the library today.

During World War II, the Georgia Coast was plagued by German U-boats due to the production of Liberty Ships in Brunswick, Georgia.  The St. Simons Island Public Library stayed open throughout the war, and was operated by personnel of the Works Project Administration (WPA).  The island had a population boom at this time.  In 1943, the library reported an inventory of 3,256 books with a yearly circulation of 9,062, and had 695 registered members.

After the war, Mrs. Fraser L. Ledbetter was appointed as Head Librarian in 1950.  She held this position for more than four decades until 1989.  During her first year in the position, the library was moved to the vacated bowling alley in the ‘Old Casino’ building following relocation of the bowling alley to the ‘New Casino.’  The library has remained in the same location since 1950, and in 2006 a renovation was completed to expand the space.

Today, the library is part of the Marshes of Glynn Libraries, which is the public library system in Glynn County, Georgia.  It is open 38 hours a week to the public, and offers an array of services.  Last fiscal year the library loaned over 73,000 items and had over 57,000 people walk through the doors.  The library provides storytime for toddlers, book groups for adults, as well as many other programs for all age sets.

Life-long local residents, newcomers, and an ever growing population of summer and winter (snowbird) visitors are served by the library.   It truly feels and sounds like a community center at the Circulation Desk.  According to life-long resident, Laura K. Williams who has been coming to the library for almost 65 years, the “library is a cultural center for the community and a singular source of stimulation for readers with very personal level of service for patrons.”