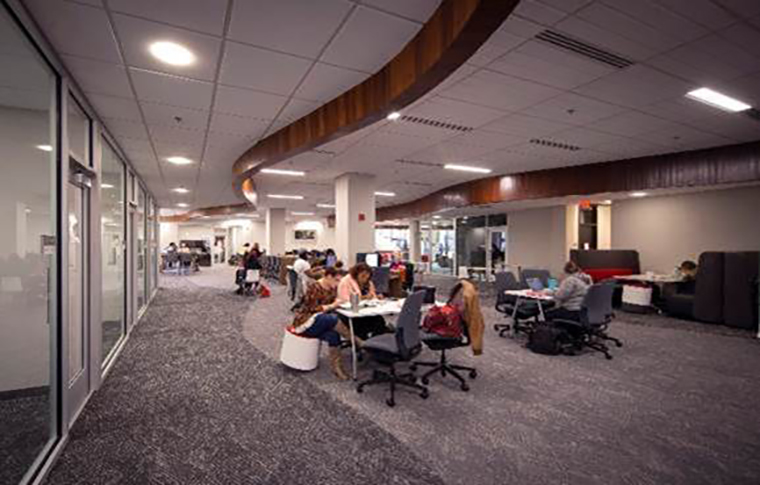 In January, 2019, Valdosta State University’s Odum Library opened a new Learning Commons area as part of a renovation project that began in the summer months of 2018. The new commons area included new study rooms, with collaborative technology workstations. The project also introduced the university’s Academic Support Center, which provides tutoring and other academic assistance to students, to its new home in the library.

The renovations involved a number of large-scale projects that readied the space for its new purpose. Eleven ranges of shelving were removed to make room for the renovation. The books on these ranges were relocated to shelves that were recently cleared in a concurrent print journal weeding project. To make room for more study rooms, the library’s Circulation Department cleared out of their offices on the second floor and relocated to a new suite of offices on the first floor. Though the project required significant work, it helped fulfill a longtime need for more open study spaces in the library

According to Dean of Libraries Alan Bernstein, “For many, many years, the library has recognized the need for more collaborative spaces for group studying.” After trying to accommodate students requests in an informal way for many years, university administrators approved the Learning Commons project, which sought to make students more comfortable, whether they were seeking a place to study or trying to get help with their classes. The new Learning Commons helps to achieve these goals by offering comfortable seating, 12 glass-walled study rooms, smart boards, and collaborative screen sharing stations.

The location of the Academic Support Center in this new common area was also critical for making students more comfortable. According to Valdosta State’s Vice President for Student Success, Dr. Rodney Carr, “Trying to create a collaborative study space makes students feel very normal about coming in and asking for help.” The director of the Academic Support Center, Dr. Chere Peguesse agrees, noting how the renovation has removed the “separation” between the center, the library, its employees and tutors, and students.

Administrators are not the only ones who have praised the new Learning Commons. Students have been flocking to the new space. Building usage assessment data collected in the space that was renovated noted a nearly 800% increase in attendance in the renovated area compared with the same area in the year before the renovation, making it the most popular space in the library by far. The renovation has driven increased attendance overall in the building as well, with both gate counts and building usage data suggesting a 15-20% increase in overall library attendance. The high level of usage has led to a second phase, to begin this fall, on the other half of the north side of the second floor, to help it match the recent renovations.