Gould Memorial Library in the Spotlight! 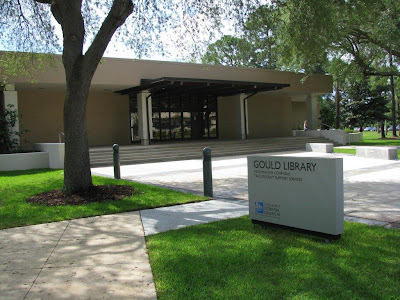 In 2009, the College of Coastal Georgia became the state’s newest four-year facility. Under the dynamic leadership of President Dr. Valerie Hepburn, the campus seemed to blossom overnight, with new buildings such as a dorm, a nursing center, an education center, and a campus center complete with a cafeteria and state of the art movie theater.

Nowhere was the change more dramatic than in the Gould Library. Although it had always been well used and highly regarded, the new Dean, Debbie Holmes, concentrated on making the library more visible not only on campus but also within the coastal community.  Library staff began working with the Multicultural Committee, the International Association and the Gay Straight Alliance to bring in speakers such as the Latina poet Judith Cofer; Emory Professor Nathan McCall, author of Makes Me Want to Holler, Gay Rights speakers  Zachary Wahls and Erin Davies; environmentalist writer Janisse Ray, author of Ecology of a Cracker Childhood; American Indian Chris Eyre, director of the film Smoke Signals; and Bruce Broder, director of the jazz documentary, Chops.
The library also co-sponsored several foreign film series that included movies such as Pans Labyrinth, Let the Right One In, Caramel, Joyeux Noel, Kinky Boots, Saving Grace, City of God, and Beyond Silence. These programs were open to both students and the community and attendance was excellent.
The library partnered with the PTK Honor Society to bring attention to Banned Books Week. Students were encouraged to read The Kite Runner, a book that has been greatly challenged, and there were discussions held around campus as well as film showings. The week culminated in a Censored Book Read-a-Thon, a day long program where faculty, staff and students selected and continuously read passages from books that had been censored at some point in time.

The library also participated in the Sesquicentennial of the Civil War through a grant project that brought in several historians. They included: John Inscoe, editor of The Civil War in Georgia: A New Georgia Encyclopedia Companion and Stephen Berry, author of House of Abraham: Lincoln and the Todds: A Family Divided by War. These lectures were open to the public and very well attended.

In November of 2012 the college library, along with the Brunswick News, the Jekyll Island Authority and the Golden Isles Convention and Visitors Bureau, co-hosted the Georgia Literary Festival on Jekyll Island. Sponsored yearly in different Georgia locales by the Georgia Center for the Book, this event was a weekend long festival,  featuring dinners with authors, tours of Eugene O’Neill’s home and on Sea island and Eugenia Price’s South, and a one-woman show honoring the actress and author Fanny Kemble. Over 33 authors presented programs in the brand new Jekyll Island Convention Center ranging from cookbooks writers such as Hugh Acheson and Nathalie Dupree to top selling thriller writer Steve Berry, and poet Judson Mitcham. The biggest coup, however, was the keynote speaker, Natasha Trethewey. Already a Pulitzer Prize winner, just a few weeks before the festival she was named the U.S. Poet Laureate.

To learn more about the library, visit Gould Library’s website at http://www.ccga.edu/Library/

A Tale of Two Libraries: How Augusta University Overcame Campus Closures and Social Distancing to Bring Finals Frenzy Programming to Students
May 29, 2020