Sharon Forks Library in the Spotlight! 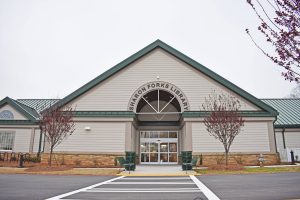 Located in the south part of Forsyth County, Sharon Forks Library serves an increasingly diverse community. Usage of Sharon Forks Library, which opened in November 2000, has outpaced even the rapid growth of the county. At 20,500 square feet it was the smallest of Forsyth County Public Library’s branches, yet it has the highest circulation of any library facility in Georgia, at more than a million items per year. We see more than 230,000 library visitors and 24,000 patrons attending programs annually. All this activity could not be contained in such a relatively small space, so we knew that we needed to expand the size of the building. We were thrilled when it was announced that Sharon Forks Library was receiving a $2 million state construction grant to add to $2.8 million from SPLOST funds and $2.4 million in local impact fees.

McMillan Pazdan Smith was awarded the contract in 2015 to design the expansion and renovation. After gathering community input and going over FCPL’s building program, MPS and library staff spent the next year designing a new building that included over 18,000 square feet of new space that almost doubled the size of the library. The construction contract was awarded to Cooper & Co. General Contractors in 2016. The 13-month construction began in January 2017. Sharon Forks Library remained open throughout most of the construction process. After the first phase of the project was completed, the branch closed for four weeks to allow staff and movers to bring most of the furniture and all of the collection into the smaller addition. Four months later the branch closed for five weeks to bring in new furniture, additional shelving, and place all the collections and furniture in their new locations.

Sharon Forks Library gained a meeting room that can hold over 400 people, two conference rooms that each seat ten, five study rooms, a children’s activity center, a teen room, many seating areas, and a Hot Spot which is a large tech-friendly space featuring mobile furniture. This collaborative space also has white boards for groups to use and is a busy space after school. With the additional shelving we were able to add a World Languages collection that includes Hindi, Mandarin Chinese, Tamil, and Telugu. The community response to this collection, and to the project overall, has been tremendous.

We hosted a Grand Reopening Celebration on March 24th which included Indian dance groups, Chinese Lion Dancers, a Chinese Tea Ceremony, two breakout rooms, a scavenger hunt, tours, and other activities attended by over 1,500 patrons. On April 13th, we held a ceremony at which public officials, Library Board members, and enthusiastic library patrons spoke about the project, which was a true labor of love for the community.