Lost in the Stacks in the Spotlight! 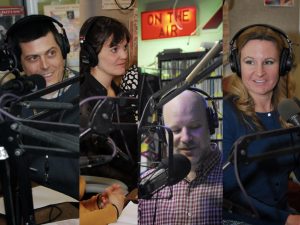 Lost in the Stacks is a collaboration between the Georgia Tech Library and WREK Atlanta, the student-run radio station at Georgia Tech. Every Friday at noon, librarians and archivists from the GT Library produce the hour-long radio show, creating a mix of music and library talk, all connected by a common theme. Recent episodes include discussions of data visualization, citizen archiving, digital preservation, and special collections, featuring interviews with librarians, archivists, professors, and students.

The first episode of Lost in the Stacks broadcast in January of 2010, produced by librarian Ameet Doshi and library technical associate Charlie Bennett. They first conceived the show as a way to engage Georgia Tech students and promote library services on campus, expecting to use an eccentric blend of library marketing, information-science musings, and rock’n’roll music to catch the attention of those who perhaps thought that libraries were boring and that all the information they needed was available through Google. Listenership, however, quickly grew past the campus community and into the greater Atlanta area, and when Lost in the Stacks began podcasting in August of 2013, the show became an international platform for investigating almost any subject through the lens of library science and archival studies, and a way for the Georgia Tech Library to present its dramatic reimagining as a 21-century digital library to the campus community and beyond.

Ameet is on extended leave from the show to focus on his current job as Director of Service Experience and Program Design, but Charlie, now the Public Engagement Librarian, co-hosts the show with Next-Gen Public Services Manager Emy Decker, Digital Archivist Wendy Hagenmaier, and Scholarly Communications Librarian Fred Rascoe. They have interviewed guests from libraries, archives, and universities across the United States, along with librarians, activists, and students in Sweden, Morocco, Finland, Mexico, Canada, and Germany, and luminaries like the Archivist of the United States, musicians Ian MacKaye and Robyn Hitchcock, writers Astra Taylor and Audrey Niffenegger, and radio producer Jad Abumrad.

You can hear Lost in the Stacks every Friday at noon on 91.1FM in Atlanta, streaming live from http://www.wrek.org/, or podcasted on Apple Podcasts, GooglePlay, or RSS.

Hancock Branch of the Twin Lakes Library System in the Spotlight!
October 18, 2019